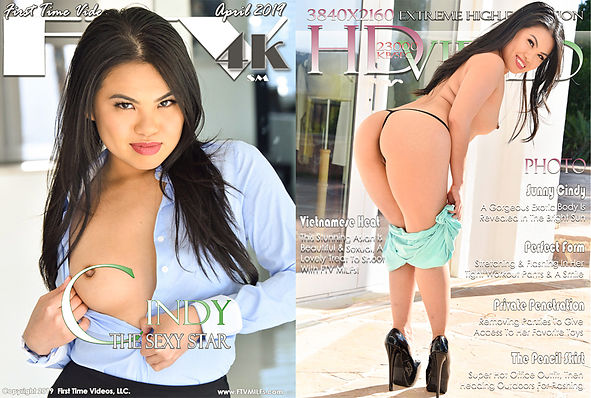 Stunning Asian MILF Cindy Starfall looks amazing in a teal dress as we're introduced to her outdoors, and she loves the feeling of the sun against her skin. We watch as she lifts up her hem, showing that incredible mature form and teasing with her labia as she pulls her lacy black panties aside. Her firm pert breasts come out next and we note how small and rock-hard her nipples are, permanently! We're treated to a butt massage before she lays back on a deck chair, pulling her panties off and touching her privates with her fingertips - we note that tight pink pretty pussy of hers - and then she changes into her tight workout gear for some yoga stretching. She shows her flexibility as she bends over to touch her toes, spreading wide open to show both her holes, and then wants to head indoors to play more! She has a small vibrating toy which we watch her use, buzzing her erect nipples to enjoy the sensations and then spreading her legs on a chair to masturbate with both vibration and penetration to a milky orgasm! Next she upgrades to a much larger black cone toy, fucking herself with the tip and enjoying how it stretches her hole out and riding on top as well, then taking it in her hole while buzzing her clitoris with a magic wand vibrator to another orgasm. After a brief rest she changes into a businesslike outfit with a pencil skirt, unbuttoning her top and using the powerful Vibraking toy to really crank things into gear and wow, she gets so wet from the sensation! To finish off the day of shooting we see her outdoors feeling the wind against her skin by the side of a busy road, lifting up her top to flash her breasts while the wind whips her hair around her face...a beautiful sight to finish the day with this amazing woman here on FTV! 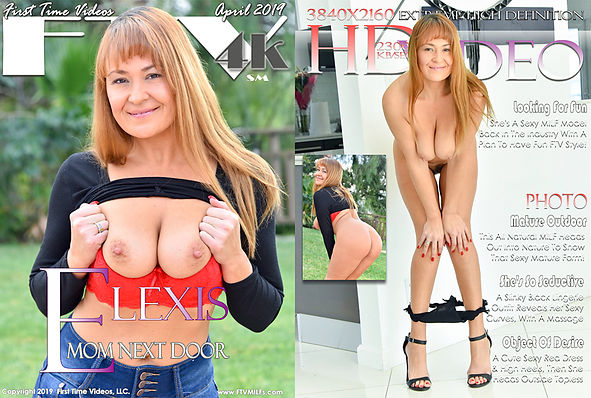 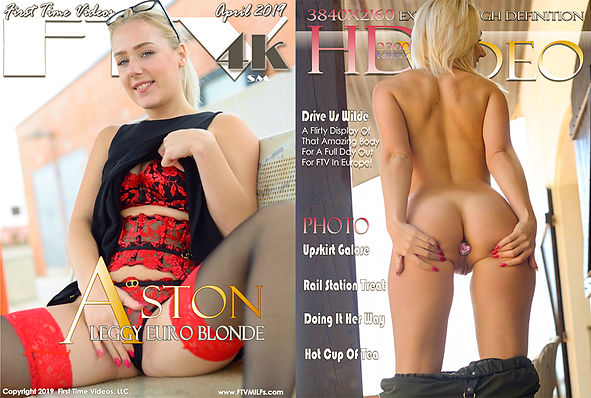 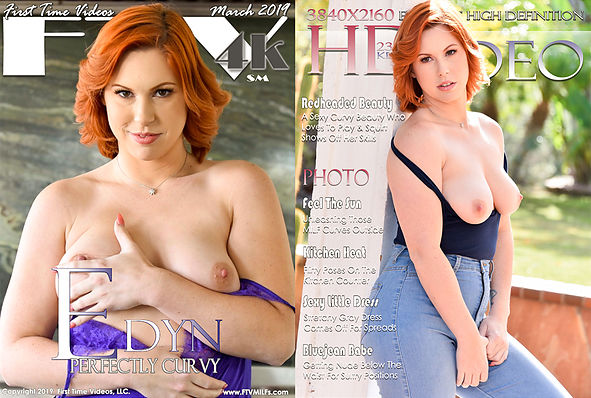 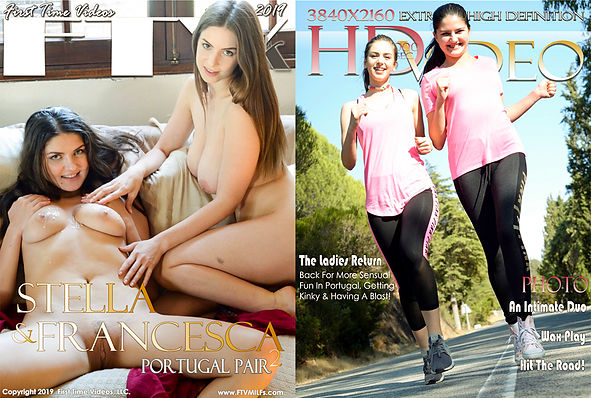 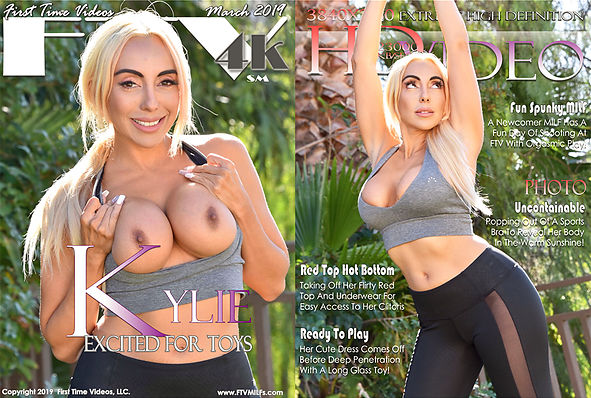 We meet sexy blonde Kylie outdoors on the public tennis court as she stretches in her tight workout gear, letting her large enhanced 32DD breasts peek out from her sports bra in the sunshine. She loves to show off and we are treated to a nice view of her sexy form before she decides to head back to the yard for a little more privacy. Next we see her peeling off those tight pants and lounging on a deck chair, spreading her legs and fingering her privates with her fingertips, and we note how wet she immediately becomes. A toy is next as she vibrates her erect nipples first, then uses the pink vibrating toy to bring herself to her first orgasm of the day! Heading indoors we see her completely nude, fucking herself with a beaded glass toy which gives her another orgasm when used in conjunction with her vibrator! After a change of clothes we see her enjoying even more vibration fun, using the black magic wand toy and then upgrading to the ultimate in vibration pleasure, the mighty Vibraking vintage toy. Those strong sensations give her one last orgasm on the day before bidding us farewell at sunset outside, a beautiful newbie with a fun sexual attitude for us here on FTV. 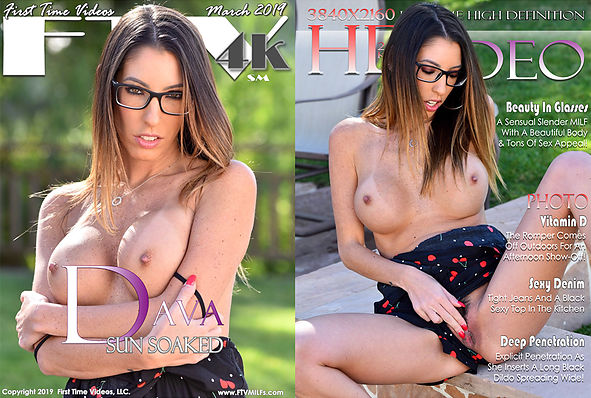 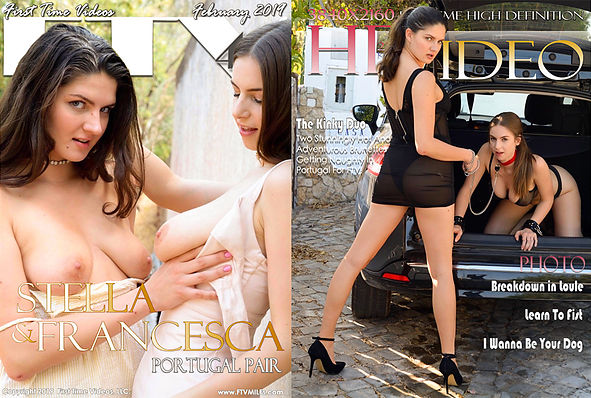 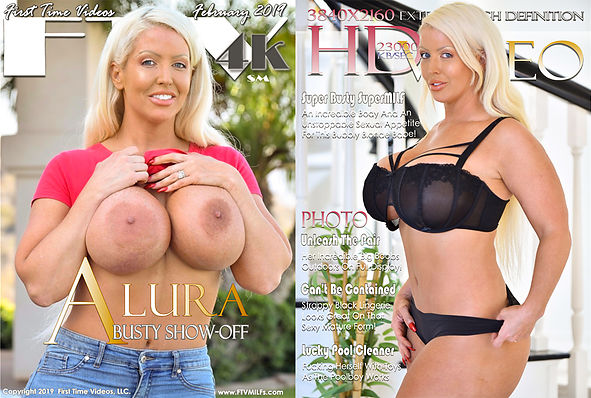 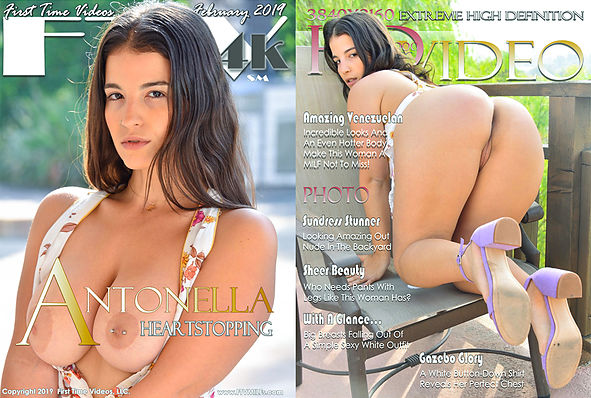 We meet super sexy busty brunette Antonella on a sunny morning as she goes through her clothes, trying on a white loose dress that easily falls open to reveal those amazing perfect 36D enhanced breasts. We see some nice downblouse looks and up her skirt as well when she bends over, then we see her out in the sunshine on the deck opening her top to give herself a nice hard breast massage, tossing her dark hair back in the wind. Next we see her using a large vibrating toy which also provides the penetration pleasure she loves, and she spreads her legs on a deck chair for a relaxing masturbation session - and we note how creamy her natural juices become! Heading indoors for more peace and quiet we see her continue her play with a magic wand type toy, buzzing herself to a nice natural orgasm. We next see her in a sheer top that shows off those breasts as she plays with her personal toy, a large blue dildo which she licks and then fucks herself with, taking it deeper as she spanks herself. Desiring some vibration as well, though, we watch as she uses the magic wand toy on her clitoris, bringing herself to a nice strong squirting orgasm! Next is all about the boobs as she gives herself a hard breast massage with spray oil, before she reaches for the powerful Vibraking toy, buzzing herself and using the blue toy for penetration at the same time. After another session with the magic wand we watch as she heads outdoors in a white button-down shirt, relaxing in a gondola with her boobs out for a little public nudity flashing fun to finish off the day...a stunning beauty with an amazing desirable form and a spectacular sensual energy, here on FTV MILFs! 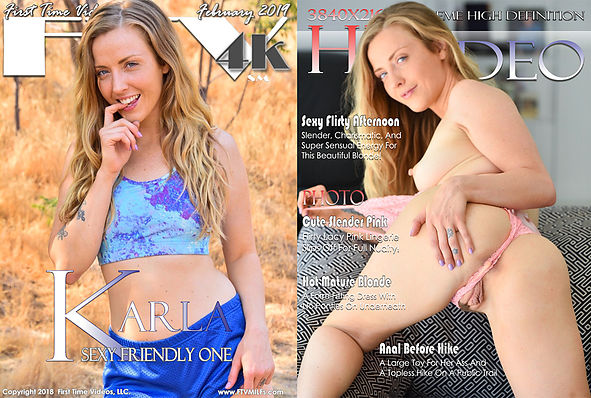 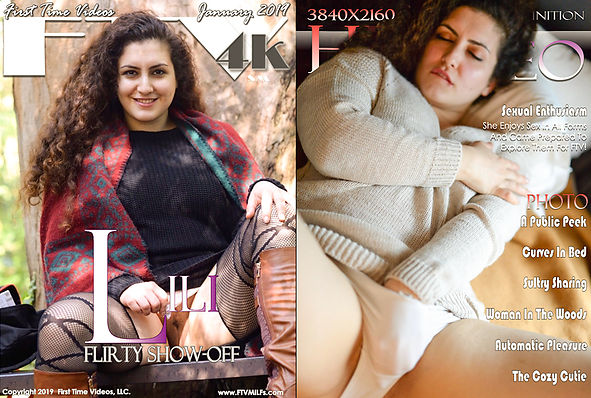 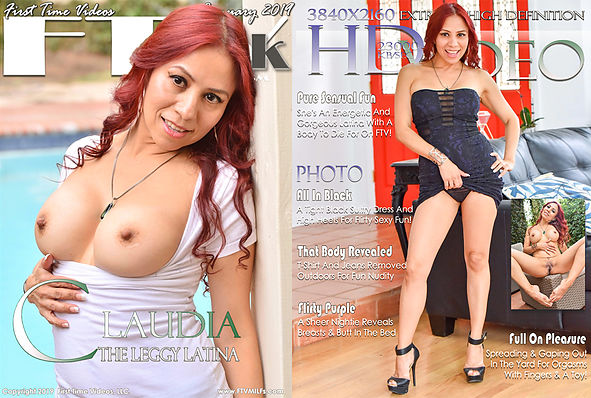 Beautiful 42 year old Latina Claudia Fox steps into our lives out in the back yard next to the swimming pool and with her colorful hair and boisterous personality she's easy to instantly fall in love with! It doesn't take long before she's letting those big 36C breasts out of her shirt, massaging and squeezing them together as well as licking and pulling on her nipples. Once her jeans come off we see her spreading her legs on a patio chair and touching her privates with her fingertips and we note how immediately wet and creamy she becomes...so she runs inside to hop on the couch there and use a toy! The first one she grabs is a vibrating purple toy that we see her use for both penetration and vibration fun, fucking herself to her first orgasm of the day. Next we see her wearing a sheer purple dress and using a larger vibrating toy which is a sort of magic wand and dildo hybrid which she loves to ride on top of, orgasming again! Getting kinky, we see her next reaching for the FTV Gape Cage which she inserts to give us a closeup view of her vagina as she buzzes her clit with the purple toy...and saving the most powerful for last, she finishes off the day with the mighty Vibraking toy. She falls in love with its powerful sensations, and we watch her cum again and again as she buzzes her clit to ecstasy...a lovely Latina with a fun and very sexual personality who enjoys showing it all off right here on FTV MILFs! 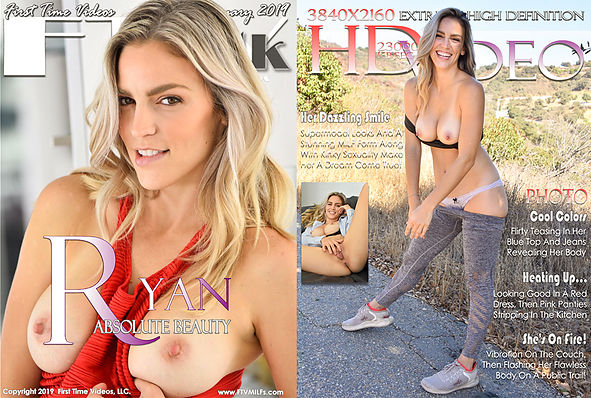 She's an absolutely stunning woman with an incredible body and we're treated to a whole day with the lovely Ryan Ryans here! We're introduced to this blonde knockout in the kitchen wearing a blue button-down shirt and jeans...and right away we note her amazing smile and those piercing eyes! She would be at home on a fashion catwalk as she unbuttons her top, revealing her perfect 34C cup breasts and squeezing them, giving herself a hard breast massage with a hand in her pants as well. Next she moves to the couch with no pants or underwear, spreading her legs to touch her private parts with her fingertips and fingering herself deeper and deeper until she brings herself to a nice orgasm. A pink vibrating toy is next, which we see her using on her clitoris and wow, that body looks incredible as she plays. After changing into her pink lingerie she slips out of it to touch her breasts again, pulling her nipples and showing how firm those boobs are...and then she reaches for the Vibraking toy! She has a red dress on now and pulls her lacy black panties aside to put the powerful toy on her pussy, buzzing herself to another strong climax, with squirting! To finish off the day we see her outdoors, taking a hike on a public trail and flashing those big breasts again in the sunshine...she loves playing with women so when she sees a random woman riding by on a horse she gets excited! A few final glimpses of that sexy body and then she bids us farewell, an absolute stunner with personality galore and tons of naughty sexual energy here on FTV MILFs. 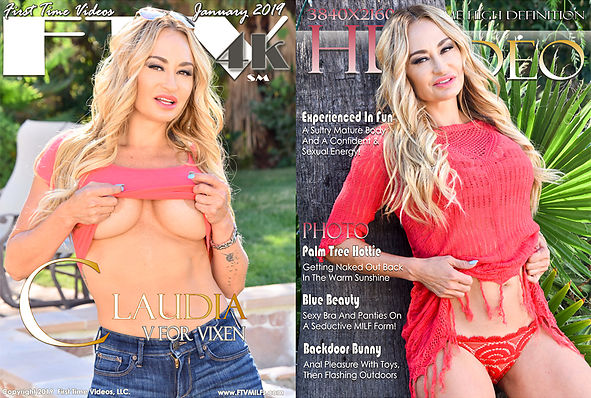 It's been over two years but beautiful Alana Cruise (previously shot as Savannah) is back and she's looking hotter than ever! We're reintroduced to her marvelous body as Alana lifts up her white shirt, revealing her sexy Ccup natural breasts, then slips out of her denim shorts to play with her panties as she pulls them aside and then up between her labia for a cameltoe. She uses her fingertips to 'warm herself up' and then reaches for a curved glass toy, fucking herself with it and wow her hole gets so creamed up from the attention as she orgasms! Next is a spread on the kitchen floor with the magic wand toy, masturbating some more and attempting to squirt but not quite reaching that despite her efforts. Then, she goes for her boobs with a hard breast massage, playing with them and squeezing them together enjoying their firmness and softness and resilience, and we note again how perfectly shaped they are with nice pink nipples. After changing into a cute silver bra and panty set she strips down and spreads on a chair, inserting a buttplug and then moving up to a large black cone for deep anal pleasure! We see her outdoors to finish off the day, sitting in a patio chair and lifting up her legs to penetrate herself for more anal pleasure with a buttplug inserted and the Vibraking on her clitoris for yet another orgasm. Last is a little public nudity fun as she goes for a hike in the park with her sports bra pulled down to reveal her breasts, and her stretchy workout pants tugged off to flash the rest of her body as well...it's a super hot return of a popular model, and she's turning up the heat even more this time here on FTV MILFs! 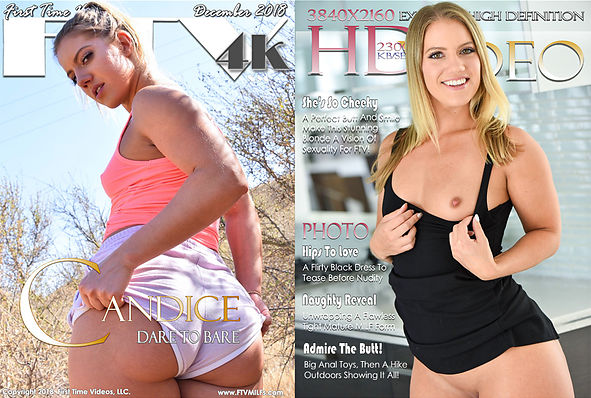 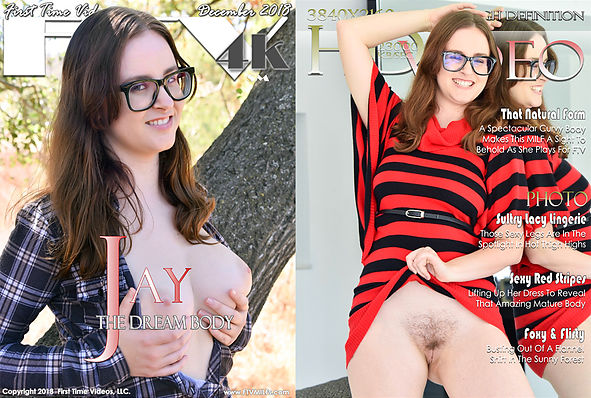 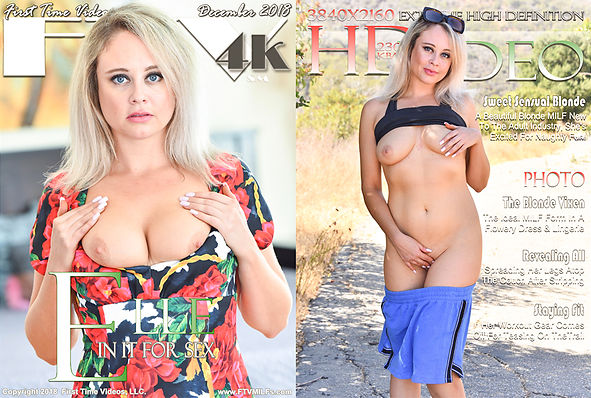 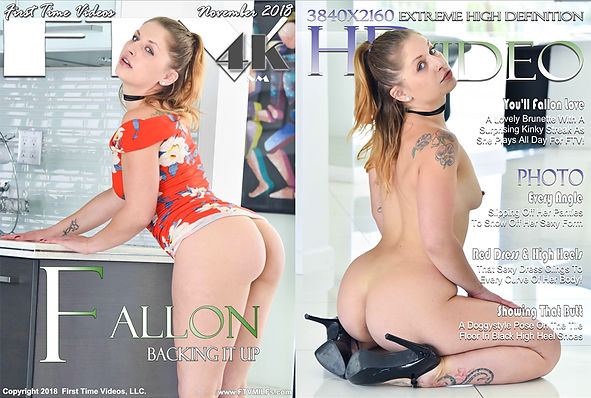